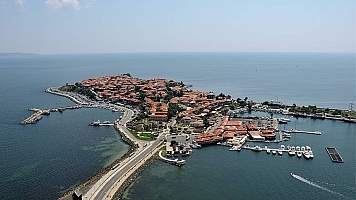 Address: Bulgaria, Nessebar
Nessebar Architectural-Historical Reserve takes the form of an 850 m long and 350 m wide peninsulais and is located in the Old Town.

Nessebar is one of the most ancient towns in Europe, founded 3200 years ago. During Antiquity the town was called Mesembria, in the Middle Ages it was known as Mesemvria, and it was later renamed to Nessebar.

There was a boom of Christian temples built on the territory of Mesemvria when Christianity became the official religion of the Roman Empire.
The New Metropolia - St. Stefan Church dates back to the period 11th – 13th centuries.  The church is not a functioning one. It was converted into a museum. The temple was decorated in 1599. More than 1000 figures in 258 compositions are painted therein. It has the design of a basilica with a nave and two aisles made of stone blocks and bricks. The church preserves an original-style painted iconostasis from the end of the 16th century and a fretted bishop’s throne and pulpit from the end of the 18th century.

The church of St. John Aliturgetus (14th century), located in close proximity to it, was severely damaged by an earthquake in 1913 and is now a free access site.
One of the best preserved medieval temples - the Church of Christ Pantocrator, is situated in the centre of Old Nessebar. It was built in the 13th – 14th centuries and has a rectangular shape.

Another church which was transformed into a museum is St. Spas Temple. It was constructed in 1609 with funding provided by a wealthy citizen of Nesember. The tombstone of Byzantine Princess Mataisa Kantakouzene Palaiologina was kept in its floor for many years. The tombstone is now exhibited in the Archaeological Museum of Nessebar.

Tourists can see the remains of thermal baths from the early Byzantine period. They were built in the 6th century and were used as baths until the end of the 8th century when they were reconstructed to become residential and farming buildings.
The Old Metropoliahe was the main church of ancient Mesemvria. It was called St. Sofia, just like the main temple of  Constantinople, the capital of the Byzantine Empire. The basilica was built at the end of the 5th and the beginning of the 6th centuries. The temple is 25.50 m long. Its walls were painted, and its entire floor was covered with a mosaic made of small multicoloured rocks.

There used to be around 40 churches in Nessebar according to some legends. Today there is information about 23 of them.

The Archaeological Museum and the Ethnographic Museum of Nessebar are also located on the peninsula. The Ethnographic Museum exhibition is displayed at Moskoyani House which was built during the Bulgarian Revival Period in 1804 and was owned by a wealthy merchant from Nessebar. The house is a typical representative of the esebar residential architecture. The museum shows objects and items used in the everyday life and crafts of the people of Nessebar, as well as traditional local costumes.
The Old Town was declared an architectural-historical reserve of national importance in 18 July 1956. In 1983 Old Nessebar was included in the List of World Cultural Heritage Sites of UNESCO.