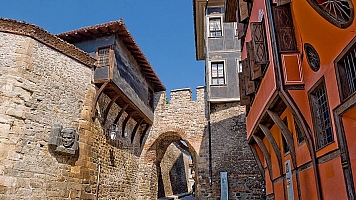 Address: Bulgaria, Plovdiv
Ancient Plovdiv Architectural Reserve is a well-preserved complex where on a relatively small area visitors can take walks through different historical ages, see ancient buildings adapted to the modern way of life and feel the spirit of the town from the Bulgarian Revival Period.

Plovdiv is one of the oldest towns in Europe – it dates back to 4000 years BC.
The Old Town lies on a natural elevation – the three hills (the closely situated Dzhambaz Hill, Nebet Hill, and Taksim Hill). Many peoples have inhabited this place through the centuries. And all of them have left traces of their cultures and also the different names they gave to the town. During Antiquity the Thracians came to the hill and set up a fortified settlement that was conquered by Philip of Macedon in the 2nd cetury BC. He gave one of the many names of the town - Philipopolis.

During the reign of the Roman Empire Plovdiv (then called Trimontium) was an important district centre. The town flourished and there was a construction boom of buildings, equipment and roads.

Many well-preserved remains have survived from the prospering town, such as paved streets, fortification walls, buildings, water-supply system and sewerage.

Some of the more interesting sites from the Roman Period are the Roman Theatre, the Roman Stadium, the Ancient Forum, and Irene Residential House.

The Roman Stadium is located beneath Dzhumayata Square where only part of it is visible. It was built in the 2nd century and was designed after the Stadium at Delphi – there are only 12 such stadiums in the world.

The Roman Theatre (the Amphitheatre) lies in a natural depression between Taksim and Dzhambaz Hills. It was constructed during the rule of Emperor Trajan (beginning of the 2nd century). It is extremely well-preserved. It used to have rich decoration and could seat up to seven thousand spectators. After it has been thoroughly restored, today performances can once again be staged at the ancient theatre.

The Ancient Forum lies near Tsentralen Square. It was built in the 1st century during the reign of Emperor Vespasian. It is a complex comprising buildings, a library, a mint, an odeon, etc.

Irene Residential House has very rich mosaic decoration which includes a portrait of a woman signed with the name Irene and dates back to the 3rd – 4th centuries.

The Ottoman army conquered Plovdiv in 1364 and gave new direction to the development of the town. The Byzantine architecture was succeeded by a completely new construction style with typical Oriental features. The new name of the town was Filibe. Chifte Bath (built in 1582 and transformed into a centre for modern arts), Dzhumaya Mosque (located in the centre of the town, next to the Ancient Stadium) and the 16th century Clock Tower on the summit of Sahat Hill are all surviving examples from this period.

During the Revival Period Plovdiv became an important economic centre. The town was inhabited by many wealthy and educated people who travelled around Europe. When they got back from their journeys they did not just bring exotic goods, but new cultural trends as well. The affluent Plovdiv merchants demonstrated their prosperity by constructing beautiful, richly ornamented houses that became emblematic for the Old Town. In architecture they are referred to as Plovdiv Houses.Unlike the small, asymmetrical and practical adobe houses from the beginning of the Revival Period, the designs of the buildings that were constructed later were more imaginative and dashing and their focus was on splendour and details. The new revival houses were symmetrical and their design was varied by adding bay-windows and gossip rooms on the upper floor. Apart from its beautiful architectural style, the rich houses had additional annexes such as marble wells, storehouses for valuable goods, premises for the servants, and even Turkish baths with laundry rooms. Special attention was devoted to the beautifully-ornamented colour decoration of the facade. The decoration of the interior consisted of wall-paintings and wood-carved furniture, ceilings and staircase railings.

The Old Town is a reserve storing a valuable part of the town’s history.