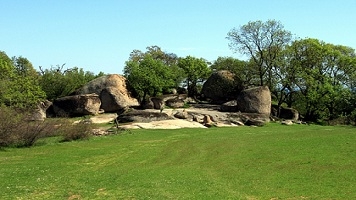 Address: Bulgaria, Primorsko
The Thracian sanctuary Beglik Tash is located 6 km away from the town of Primorsko, in the immediate vicinity of "Ropotamo" reserve. This is the oldest temple, found so far in Southeast Thrace and along the Black Sea Coast.
The foundations of houses, the parts of ritual fireplaces and the other traces of human activity, uncovered at this place, date back to the thirteenth century BC. At that time, this was the place where various rituals, dedicated to the goddess of fertility, were performed. The gifts found – semi-precious stones, are an evidence for that. During the excavations on the site were found various pottery artifacts and tools, made of stone and flint. The sanctuary stopped functioning in the early fourth century AD. There is no evidence of later construction and this makes the place unique, with all of its elements preserved in their original form.
The sanctuary itself is a huge circle formed by stones, located on an area of ??6 acres. The stones were moved in one place, partially hewn by hand and then arranged to form a clock, a calendar and an observatory.

The sanctuary served as:

Temple - completely preserved altar for sacrifice, carved in the rock, in which there are several carved out grooves, leading to a ditch, an altar, a stone throne, where the chief priest sat. Unlike in other sacrificial places, there has been found no evidence of animal sacrifices here. In honor of the goddess of fertility were served only grapes, olives and other fruits, symbolizing fertility.

Calendar - there are openings, carved out in the rock, over which, when there was full moon or equinox, passed light, between the boulders along the edges.

Clock - the stones are arranged in such a way that the sunlight falls through them and results in division into 6 parts, which was the division of the day.
The favorable climate of the place, its proximity to the sea and the river, as well as the topography of the area, were the main reasons for the construction of the nearby town Ranuli, to which the sanctuary used to belong.