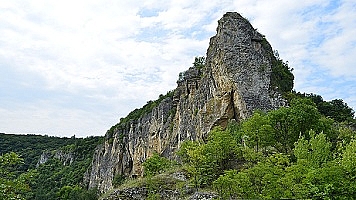 Address: Bulgaria, Ruse
IVANOVO ROCK CHURCHES
Ivanovo rock churches are one of the cultural heritage sites in Bulgaria, included in the UNESCO list. They are located in the village of Ivanovo, 20 km away from Ruse, in the natural park "Rusenski Lom." This is a monastery complex, which encompasses several rock chapels. It was founded in the thirteenth century by the monk Joachim, who later on became Patriarch of Tarnovo.
During the Second Bulgarian Kingdom (13-14th century) its ktetors (i.e. donors) were the Bulgarian Tzars Ivan Alexander and Ivan Asen II, whose portraits are preserved till today in the monastery. The monastery was the center of one of the practices in the Orthodox Christianity, called hesychasm.
There are frescoes and inscriptions, preserved in the rock chapels of the monastery, which carry the characteristic features of the Bulgarian religious art from that period. They are cultural heritage, a proof for important historical events in Bulgaria, an evidence of the significant role of the monastery as a literary and spiritual center of Bulgarian culture in the 13th and 14th centuries. The most famous of them are in the church "Holy Mother of God" and these particular frescoes were the basis on which the monastery was listed a World Heritage Site by UNESCO.
Today the monastery is an archaeological park and is not operational.