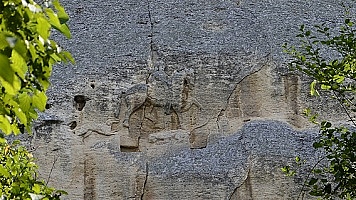 Address: Bulgaria, Shumen, Madara
The Madara National Historical and Archaeological Reserve is one the most visited sites in northeastern Bulgaria. It is located 17 km away from Shumen and about 70 km away from Varna. Every year it attracts thousands of tourists, not only because it is the place where have been found the oldest remains of civilization in the Balkans, but also due to the fact that this is where the Madara Horseman (Madarski konnik) is located. The sculpture is a unique rock bas-relief, one of its kind in Europe, carved into a cliff, 23 meters above the ground. For this reason it was included in the World Heritage List of UNESCO.
Madara is an extremely enchanting place. Since the Neolithic it was inhabited by primitive people, Gets (or Getae), Romans, Byzantines and Slavs, Proto-Bulgarians, Bulgarians and Turks, which accounts for the significance of this area as a religious center.
More than 5,000 years ago in this place settled the prehistoric man in the so called "Small cave." Later on, for several centuries, the place was inhabited by one of the largest Thracian tribes - the Gets. They used to live in the rocks, in cliff dwellings, and the so called "Great Cave" was a sanctuary where various rituals were performed, all related to their customs and the worshipping of many gods.
During the period from I century to V century the area was part of the Roman Empire. The most remarkable heritage from that time is the Roman villa inhabited from II to IV century. It is a huge complex of buildings and probably was owned by wealthy slave-owners.
During IV and XIV century a fortress was built at the place, which had been repeatedly reconstructed and finally destroyed during the Ottoman invasion.
In the Middle Ages the Madara plateau was the pace where important historical events for Bulgaria took place. Now this place holds some of the most significant historical and cultural heritage of our country. There are inscriptions left here, a testimony for the foundation of the Bulgarian state.
In IV c. one of the most important rock monasteries in Bulgaria was built in the Madara plateau. In the cliffs, naturally carved throughout the centuries, there were active chapels, churches, tombs and cells. The rock chapel "St. Panteleimon" has survived until today, and is still functioning.