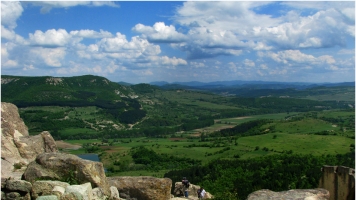 Address: Bulgaria, Kurdzali
Perperikon is an archaeological complex consisting of a large megalithic shrine, dating back to 8000 years ago during the Stone Age, monuments from Antiquity and a medieval fortress. It is located in the Eastern Rhodopes, on top of a hill, 470 m above sea level, 15 km northeast of the present-day town of Kardzhali.
The area of the megalithic complex is 5 sq km and it is the largest in the Balkans. Millennia ago, Perperikon was a large rock massif, with no vegetation on it. This attracted the people there, who deified the stupendous cliffs. It is no chance that the Eastern Rhodopes are the cradle of the megalithic culture. In the beginning people were unable to cut into the rocks and relied on their natural splendor. Later on, they began to carve and shape entire premises.
The period of Perperikon’s first flourishing was between 18th and 12th century BC, a noteworthy era - the ages of the Cretan-Mycenaean civilization, of Troy and Mycenae. Perperikon had already been a large rock cult complex. The archaeological complex comprises of four structure defining parts, which form a perfect Neolithic composition:
-  A massive fortress wall.
- An acropolis, built of large stone blocks, located on the highest part of the hill.
- A palace - carved into the rocks, covering an area of ??10 000 sq m
- North and south suburbs - small streets cut into the rocks, houses and temples.
The excavations started in 2000. There is evidence that the sanctuary of Dionysus from the Thracian tribe satri was located in Perperikon. Legend has it that Dionysus roams around the earth, teaching people how to grow grapes and make wine. As a result, later emerged celebrations in his honor.
The intensive excavations at Perperikon resulted in abundant archaeological finds. The classical ancient period of the architectural structures at Perperikon completely matches the artefacts from that time. At the foot of the city was discovered one of the earliest Thracian silver coins, dated in the fifth century BC. Especially beautiful are the objects from the Roman age (1-4 century AD). There are many coins from that time, which indicates strong commercial exchange.
Most gold items, however, belong to Late Antiquity (5th -6th century). From this period also come numerous beautiful ceramic pieces, and many coins, illustrating the economic recovery after the Gothic invasion. There is also a worldwide unique collection of lead seals - molybdobuls that originate from the regional center under Perperikon. There are more than 20 bronze crosses of different sizes, belonging to the same area, with images of Christian saints on them. Here was found an incredibly beautiful silver key for a treasury chest. The cross is tracery and different techniques were used in its make. It has a movable arm and served also as a stamp for the wax put after locking the precious treasury chest. The key is one of its kind from this period in the world heritage. The finds from the archaeological excavations in 2001-2002 are already thousands. They fully support the idea that we have of the significance of the holy city of Perperikon. It is a matter of time before the findings are displayed in the exhibition of the Regional Historical Museum of Kardzhali.