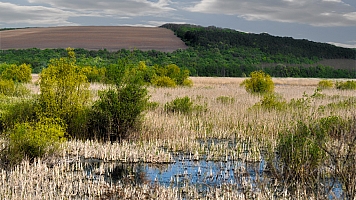 Address: Bulgaria, Srebarna
Srebarna a biosphere reserve, which is located near the Srebarna village, 16 km west of the town of Silistra and 2 km south of the Danube river. On a total area of 600 ha the reserve includes Srebarna Lake and its surrounding lands. Srebarna is situated on the main migratory flyway of the migrating birds between Europe and Africa - "Via Pontica".

There are several legends about the origin of the name of the reserve. According to one of them this was the place where Khan Srebrun found his death in an unequal battle with the Pechenegs. Another legend has it that at the banks of the swamp there was a hidden boat, full of silver. The third story, the most plausible one, has it that the name came from the magnificent view of Srebarna reserve on a full moon night.

In 1911, Srebarna draw the interest of the Bulgarian Aleksy Petrov. He visited the place and was impressed by the beauty of the bird world there. He started planning expeditions and studying the breeding bird colonies. In the past, Austrian ornithology researchers have also shown interest in the area.

However, Srebarna is most famous for the birdlife on its territory: 221 species nest there, including pelican, pygmy cormorant, glossy ibis, spoonbill, Mute Swan , Ferruginous Duck, Lesser White-fronted Goose, Red-breasted goose, greylag goose, duck, bearded reedling. This place hosts the only nesting habitat of the Great White Egret in Bulgaria,

In 1948 Srebarna region was declared a reserve and in 1977 it was adopted as a biosphere reserve, part of the UNESCO list. In 1983 it was included in UNESCO world heritage list of cultural and natural heritage.

At Srebarna biosphere reserve there is also a Natural History Museum, exhibiting stuffed animals. Near Srebarna there is an eco trail with special grounds for bird watching.