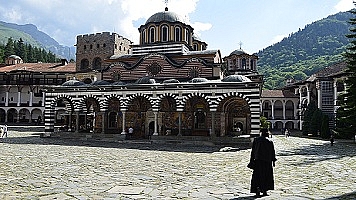 Address: Rila monastery, Rila village
Rila Monastery is the most significant monument, part of the cultural heritage of Bulgaria, included in UNESCO’s World Heritage List. It is situated in the Rila Mountains, 120 km away from the capital of Bulgaria - Sofia, and 41 km away from the town of Blagoevgrad.
It was founded in the first half of the 10th century by the first Bulgarian hermit, later canonized as a saint, John of Rila.
St John of Rila became the most famous Bulgarian saint, a patron and a religious teacher of the Bulgarian people on the border of the first and second millennium. He is the founder of the largest stauropegic monastery in the lands of Bulgaria. The fact that John of Rila chose this place to indulge in constant prayer and fasting is not an accident. In the deepest recesses of the Rila Massif, in a cave, he was far away from human vanity and close to the gods. There he healed people and made miracles. Soon after settled in the cave, pilgrims and followers of the seclusion from society started flooding to this place. Thus his fame reached Tsar Peter. One of the legends has it that the king traveled a great distance just to meet the hermit and to reward him richly. However, St John of Rila returned the gifts and refused to meet him. Proof of this can be found in the saint’s exhortation, written in 941, which is his religious message to the believers. The hermit died in 943. 34 years after his death his relics were transferred to Sredets. And then he was canonized by the Bulgarian Orthodox Church. His relics had miraculous powers. According to another legend the relics healed Emperor Manuel I Komnenos. In 1095 the relics were transferred to Veliko Tarnovo by order of Tsar Asen. For three centuries they have been kept in one of the churches there. In 1469, by order of Sultan Mohammed II, they were returned to the Rila Monastery.
Hrelyu, the Struma feudal protosebastos, rehabilitated and strengthened the monastery. In 1333 Hrelyu built a defensive tower with a church next to it that has remained to this day and is one of the preserved wonders of the Rila Monastery from the Medieval Ages. The tower was used as a shelter by the monks in case of bandit attacks. Built as a real fortress, the tower has 5 floors and is 25 meters high. On the top floor is the chapel "Transfiguration of Christ", which is entirely decorated with frescoes from the fourteenth century that have survived until today.
The monastery, which has always enjoyed the official support of the palace, rapidly grew into a cultural and spiritual hub, not only on Bulgarian territory: the monastery cooperated with the monasteries on Athos and its influence equals the one of the monasteries in the Holy Mountain.
The most valuable medieval art masterpiece in the monastery is Rafail's Cross. The cross is made ??of a whole piece of boxwood. There are 36 biblical scenes, depicted on it, and more than 600 small figures, and all that was crafted on a wooden cross with dimensions 81 x 41 cm. From the years-long work on this cross, the monk lost his sight and became blind.
In terms of magnificence, Rila Monastery rivals the biggest monasteries in Europe. At the same time, it comprises lots of non-traditional architectural solutions, the end result of self-taught artists. Such a solution is the monastery kitchen. The kitchen is a work of Master Alexi Rilets. It is a 22-meter cone shaped chimney.
Today the monastery is a functioning male monastery, offering accommodation. Also the monastery bookstore, the shops at the Hrelyu tower and in the area around the monastery, sell icons, albums, cards, gifts and products from traditional Bulgarian crafts.