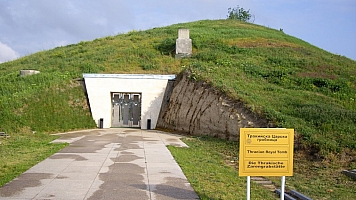 Address: Bulgaria, Sveshtari
The tomb of Sveshtari is located in northeastern Bulgaria, 2,5 km south-west of Sveshtari village, 42 km north-east of the town of Razgrad. The tomb is among the 100 Tourist sites of Bulgaria and is also included in the World Heritage List of UNESCO.
It was discovered in 1982 during excavations of Ginina Mogila, situated near Sveshtari. This is a Thracian-Hellenistic king tomb, dating from the first half of 3rd century BC. It is believed that this is where Dromichaetes - ruler of the Getae, was buried.
The tomb is built of cut soft limestone blocks and consists of a corridor and three square chambers: antechamber, lateral chamber, and burial chamber. The vault is semi-cylindrical. At the entrance there are columns with Ionic capitals and above them there is a plate with relief frieze, adorned with stylized bovine heads, rosettes and garlands.
It is assumed that the decoration of the tomb was made of precious metals that were looted in antiquity. There were found bones from five horses, buried alongside their owner, to accompany him in the afterlife, as well as two stone beds, human bones and burial gifts.
Archaeologists believe that there was a sanctification (heroization) of the deceased ruler. The sanctification ritual is depicted under the vault of the burial chamber: the ruler on horseback, accompanied by two armour-bearers, and a goddess standing in front of him, giving him a golden wreath. She is followed by four women, carrying different gifts in their hands.
The walls of the chamber are in the form of columns. Under the vault there are blocks, supported by 10 caryatides (female figures). The sculptures are 1,20 m high, standing with their arms raised. They are dressed in long sleeveless dresses, with their curly hair falling over their shoulders. They wear a specific kind of basket on their heads, called calathos. Their hair, faces and clothes were colored, evidence for which are the remnants of preserved dark brown paint. The way the statues of the caryatids were made and painted makes archaeologists think that the ruler, for whom this tomb was intended, has died suddenly.
The whole area around the tomb of Sveshtari was declared an archaeological reserve - within a distance of two kilometers there are other 26 mounds of various sizes preserved.
On a session of the World Heritage Committee, held in Paris in 1985, the tomb of Sveshtari was included in the World Heritage List by UNESCO.