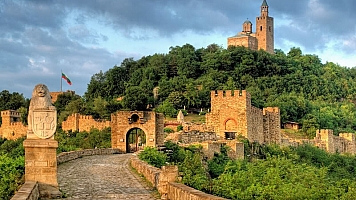 Address: Bulgaria, Veliko Tarnovo
Known also as "Wax Museum", "Tsarevgrad Tarnov" multimedia visitor center is located in the town of Veliko Tarnovo, in close proximity to the historic hill Tsarevets, in the heart of the capital of the Second Bulgarian Empire. Here, on an area of 870 Sq m, through sculptures and frescoes, are presented historical characters and memorable events from the period of the Second Bulgarian Kingdom. Guests of the town have the opportunity to get to know the life of different social strata from the medieval Bulgarian society, i.e.  clergy, rulers, boyar and warrior class, craftsmen.

Visitors also have the chance to get acquainted with the rich history of Tarnovgrad - a symbol of spiritual power, magnificence and battle glory. The author of the idea of the representation of historical persons is the sculptor Boris Borisov. The center comprises 29 sculptures and its guests can gain a realistic idea about the historical events from the Bulgarian Middle Ages, related to the grandeur of Tarnovgrad.

Visitors can also see the figures of the greatest tsars from the time of Bulgaria’s glorious past - Tsar Kaloyan and Tsar Ivan Asen II. One of the most impressive scenes represented is the capture of Baldwin IX Count of Flanders by Tsar Kaloyan.

The multimedia visitor center was built as part of the project "Enhancement of tourist attractions and related infrastructure in Veliko Tarnovo Municipality." From its opening till now the place has been visited by more than 97 000 Bulgarian and foreign tourists. Due to the strong interest in the center, the plans are for it to expand on another 1 000 square meters, and include additional new sculptures and scenes.