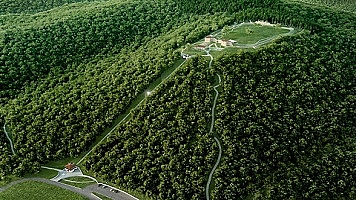 Address: Bulgaria, Belchin
The fortress Tsari Mali Grad is located near Belchin village, Samokov municipality, on Sveti Spas Hill. The fortress has preserved evidence from several different eras and peoples - Thracians, Goths, Huns and Romans. There are several ways to reach the fortress. The first one is to use an elevator that leaves from the foot of the hill and has two stops: the first is the church "St. Petka" and the second is the “ Tsari Mali Grad”  fortress. The other option to reach the fortress is to take one of the two eco trails in the area. Both lead to the central site of the fortress, which offers a breathtaking view to the so called "Valley of the storks", in which Belchin is located.
According to the scientists, the oldest inhabitants in the area were Thracians. Evidence for that are the found coins, pottery, and weapons, as well as a sanctuary, with more than 20 pits, used for cults, where various rituals were performed. The pits are arranged in the shape of a constellation, and used to be filled with water. In certain times of the year, the constellation was located over them, and thus ancient astronomers were able to tell the season of the year, as well as set their calendar.
Later, a church was built on the place of the sanctuary. Its proportions and arrangement correspond to the proportions and arrangement painted on one of the golden plates found in the Varna Necropolis - the place where the oldest processed gold in the world was discovered.
Another unique discovery, found during the excavations in the area, is a coin with the image of Galla Placidia. She was the daughter of the Roman Emperor Theodosius I and for a short period of time a wife of the Gothic king Ataulf. After his death she married Constantius III. They called her the "Roman Cleopatra." She was buried in a mausoleum in Ravenna and was the only female ruler to have been granted this honor. So far, only two such coins, with her image on them, have been discovered: one of them is the "British museum" and the other one is in Rome.
Shortly after Constantine the Great declared Christianity the official religion, a church was built on the hill above the village. In late antiquity it was destroyed several times by different tribes of Huns and Goths who also destroyed the fortress completely.
In the Middle Ages the church was rebuilt under the name "Ascension of Christ." During the Ottoman rule it was burned to its foundations. Currently it is restored back to its original architecture from the V century.
On the first stop of the elevator there is another church from the times of Ottoman rule. It is named after „St. Petka" and part of her relics are kept in the in the church.