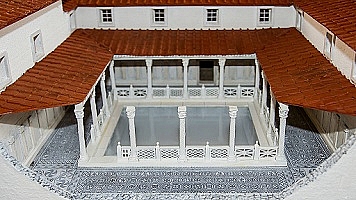 Villa Armira is located 4 km from Ivaylovgrad, on the border between Bulgaria and Greece. The name of the villa comes from the name of a creek flowing nearby. The area is known for its rich natural, cultural and historical heritage.

Villa Armira is the most richly decorated private palace from the Roman ages discovered on the territory of Bulgaria. It is also one of the most accurately dated complexes found in our country.


The villa is in the center of a land property, most likely founded by a wealthy Thracian aristocratic family. The villa dates back to approximately 45 AD or to about 25 years after the province of Thrace was conquered by the Roman army and became part of the Roman Empire.
The first owner was probably a Thracian ruler or his son, who ruled over the entire area along the river of Arda. The villa was built on an area of 3600 sq.m, comprising a residential building, a garden for relaxation and a terrace from which the inhabitants of the house enjoyed the estate. From the very beginning, on the territory of the villa were discovered marble deposits and white marble and stone quarries were built. More than 3000 elements of high quality white marble were found during the excavations. Actually, the quarries made the owners rich and able to afford a marble palace. At the beginning, this marble served for decoration of the house. It was used for the mosaic in the corridors, around the pool as well as for its flooring. From that time dates an amazing colonnade of fine columns and capitals in the Roman Corinthian style in the peristylium - the inner courtyard.

The whole building is designed in the Roman architecture style. It’s a two-storey building with around 22 premises: hall for feasts, owner quarter, rooms for guests, a bathroom in a typical Roman style, even a sauna, which is indicative of great luxury.

After about 300 years of flourishing the villa was burnt and looted. The villa is an architectural monument.