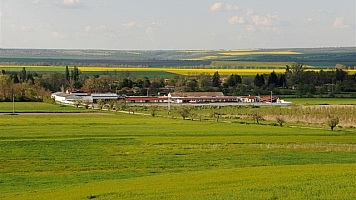 Address: Bulgaria, Bluskovo
SALLA ESTATE winery was built in 2010. It is located in the village of Blaskovo, formerly called Salla, part of Provadiya Municipality, 60 km away from Varna, in the center of the famous Provadiya plateau Sarta. The altitude is 200 m and the climate is temperate continental with relatively cold winters and warm summers. On the northern and part of the eastern slopes grow oak and hornbeam forests, while the southern parts and the ridges are deforested.

Near the village is also located the naturally protected medieval fortress Muhaliysko Kale, with a carved rock monastery, dating back from the XII - XIV century. In the cave, called Tapanite (meaning”The Drums”), inhabited since the Stone Age, with every beat is heard an echo that is like the sound of a drum.

The winery "Salla" owns 300 hectares of vineyards, located right next to the wine cellar, on the southwestern slope. The area combines unique natural conditions - a mixture of suitable soil, terrain and climate. Before planting new vineyards, which were bought from the French company "Guillaume", in the region were found Greek and Roman coins from Moesia and Thrace, pottery and ceramics dating back from the IV century to the XIX century BC, which is evidence for the existence of a large wine market in the region. The wine varieties are: White wines - Chardonnay, Sauvignon Blanc, Traminer, Riesling; and the red wines are: Pinot Noir, Cabernet Franc as well as the Bulgarian variety: Vratsa Miscet.

For the production in "SALLA ESTATE" winery are used methods which retain to the greatest extent possible the natural raw material, thus making it possible for the characteristics of the different varieties to be fully expressed. During the winemaking process is used the most advanced equipment and are applied the most innovative processing technologies, which makes the wine produced one of unique quality.