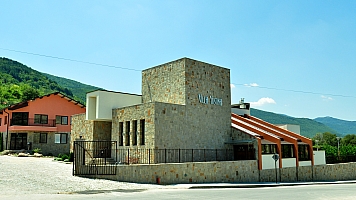 Address: Bulgaria, Ustina
Villa Yustina winery is located 26 km away from the city of Plovdiv, in the outskirts of the so called Rodopska Yaka (meaning the Rhodopean Collar) area, in the village of Ustina. It’s not an accident that this particular place has been chosen. This is the region with the oldest wine history. It was described from Herodotus in legends of the ancient rites of the Thracians and their local wine. It is considered that the area around Ustina village was the territory of the ancient Thracian capital Besapara. The Thracians were famous wine producers, as far as 5000 years ago they brought the first vines in the Balkans.
According to Homer, the heaviest and the most fragrant wine came from Thrace.
Villa Yustina winery was founded in 2006, and has 250 decares of own vineyards, with grape varieties like Sauvignon Blanc, Chardonnay, Colombard, Traminer, Aligote, Pinot Noir, Merlot and Cabernet Franc.
The region has a temperate continental climate, with clay soils suitable mostly for growing red wine grape varieties. The winery has a capacity to process 300 tons of its own grapes, and has underground premises for storing and aging wine that can fit about 600 barrels.
Villa Yustina has a tasting room for 50 people. One-third of the oak barrels are replaced annually, and for achieving variety of the quality they are being delivered by 7 French and two Bulgarian manufacturers.