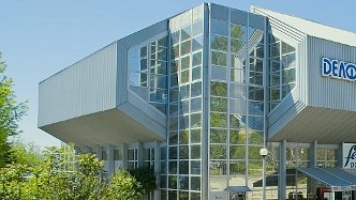 Address: Bulgaria, Varna, Sea garden, 2 Saltanat аrеа
Dolphinarium is a unique attraction facility, lying amidst a green landscape in the northern part of the Sea Garden in Varna, allowing a magnificent view to the sea.
It was opened on 11 August 1984, and since then it has been one of the symbols of Varna and tourism in Bulgaria. Dolphinarium is a favorite spot in the sightseeing program of all tourists visiting the Black Sea.
The building strikes with its futuristic design and face of both aluminum and glass.
Another original facility is the café occupying the eastern part of the Dolphinarium. In its closed hall there are 70 seats, with special windows overlooking the pool, which allow underwater viewing of the dolphins. The café also have a summer terrace allowing a panoramic view of the entire Varna gulf.
At present there are 6 dolphins - 2 male and 4 female - Kimbo, Doli, Popi, Yoana and Bimbo; 3 of them were born in Festa Dolphinarium.
Dolphins and their trainers perform the remarkable Dolphin Show, conducted in four languages at a time – Bulgarian, Russian, German and English. The Dolphin Show comprises of several elements: acrobatics, balancing, music, singing, dances and games with the audience. The show lasts 40 minutes.