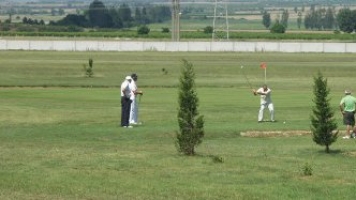 Golf complex Air Sofia, near the town of Sliven, is the second golf course, after the one in Ihtiman, which is under the aegis of the Bulgarian Golf Federation.
The largest golf course in Bulgaria has opened in May, 2004. 18 fairways and greens have been constructed after proper land improvements and preparations. There are also training course and greens available. Golf training with qualified instructors is being organized on a regular basis. The first tournament in Sliven was held on 19 June, 2004 and was won by Dr. Stoyan DImitrov.
The grass, planted from special selection seeds, is regularly maintained with cutting edge equipment and “Rainbird” irrigation system by trained professionals. The improvements on this golf course have never stopped since its opening.
There is a pro shop in the building of the golf club, where one can hire clubs, a restaurant and a hotel part, overviewing most of the greens.