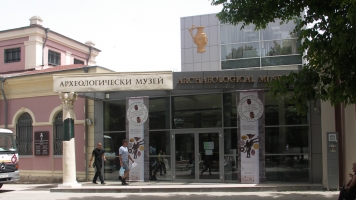 Address: Bulgaria, Plovdiv, 1 Suedinenie str
The Regional Archaeological Museum in Plovdiv is one of the oldest museums in Bulgaria, founded in 1882. At first, the exhibits in the museum comprised 1,500 coins, old printed books from 17th and 18th century, church plate, icons and works of art by some of the most famous Bulgarian painters: Ivan Lazarov, Tsanko Lavrenov, Nikolai Raynov and Zlatyu Boyadziev.
Today, the museum houses one of the largest collections with about 100 000 exhibits from prehistoric times to the National Revival period.
During the Chalcolithic period and Bronze Age there were several settlements located on the territory of the town, from which many artifacts had been preserved: stone tools, horns, bones and flint, various pottery, jewelry and amulets from the Neolithic, Chalcolithic and Bronze Ages.
In the second half of the first millennium BC, a large settlement formed, inhabited by the Thracian tribe Odryses. This tribe is known as the only one having a state system. At that time the town grew into a city with fortress walls, drainage and paved streets. The fortified royal center was located on Nebet Tepe. The Thracian aristocracy was buried in huge tombs with varied architecture. There are many mounds found in the areas around Plovdiv: Starossel, Perushtitza, Brestovitza. The most valuable and remarkable discovery near Panagyurishte is the Panagyurishte gold treasure.
The Antiquity department of the museum features more than 5,000 exhibits, representing Thraco-Roman heritage: sculptures, plastic art pieces, mosaics.
Throughout the centuries, the town had many names, the most famous of which is Philippopolis. It is believed that it comes from Philip II of Macedon. In the Roman era Philippopolis became the largest ancient metropolis of the province of Thrace. Large public buildings, such as the ancient theater, the stadium, the forum, the basilica, the baths and the synagogue, have been preserved till present days. During the Middle Ages Plovdiv continued to be an important cultural, political and economic center. From that period there are various objects including jewelry, church plate, armor and ceramics on display at the museum.
From the period of the National Revival remained a unique architectural ensemble, situated on so called “Trihalmie”, meaning three hill. There are also rich collections of buckles, jewelry, belts, and luxury household items, all of them of great artistic value.
The Numismatic Department of the Museum is also of particular interest. It features more than 60,000 coins, dating from 6th century BC to 20th century.