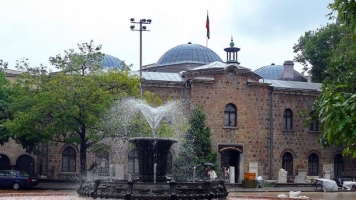 Address: Bulgaria, Sofia, 2 Suborna str
The National Archaeological Museum is located in the city center of Sofia, in Buyuk (the big) mosque. This is the oldest preserved building in Sofia from the times of Ottoman rule, dating from the end of the XV century. Today the Archaeological Museum is a real museum treasure house featuring more than 450 000 valuable exhibits. There are hundreds of priceless sculptures, tombstones, reliefs, bronze statues, pottery, coins, gold Thracian treasures, ornaments and jewelry.
What impresses the visitors most is the life-size spear of the Madara Rider, which is placed right opposite the main entrance. The Madara Rider is a unique rock relief, created by an unknown artist during the Early Middle Ages. Its original is located 16 km east of Shumen, and because of its uniqueness it was inscribed in the UNESCO World Heritage list.
The exhibitions of the museum are displayed on two floors.
Hall "Prehistory" houses artifacts, displayed in chronological order, from the Paleolithic Period the Middle Bronze Age. Among the most interesting exhibits are tools, clay and bone figurines, ceramic models of houses and furnaces.
In the central hall of the Archaeological Museum, which covers both its storyes, are displayed findings from the Late Bronze Age to the Late Middle Ages. Many of the exhibits are related to the flourishing of Thrace (V - III century BC) and the Odrysian kingdom. Artifacts from the mound necropoles of the Thracians are also on display. From both sides of the entrance to the main hall, visitors can see the tombstones, statues of deities, ceramics and other objects, found along the Black Sea and Aegean coasts. There are also many artifacts discovered in the necropolis of Apollonia Pontica (present-day Sozopol) and Odessos (present-day Varna). The museum houses very well preserved Roman stone monuments and Greek sculptors’ works too.
The hall on the second floor features the most valuable exhibits of the museum – the Valchitran treasure, dated XIV - XII century BC., as well as the Lukovit treasure, dating back to IV century BC.
The Valchitran gold treasure is the biggest treasure found on the territory of Bulgaria. It was discovered during agricultural work in 1925. The treasure consists of 13 objects with a total weight of 12.5 kg.
In 1953, near the town of Lukovit, an ancient Thracian treasure was accidentally found. The hoard consists of 15 silver vessels, 23 ornaments and applications for horse bridles, 200 silver rings, hemispherical buttons, tubules and small applications with artistic images of human and animal heads.
Golyamata Kosmatka (meaning “The Big Hairy”) is a Thracian mound near Shipka, Bulgaria, where on September 21, 2004, Dr. Georgi Kitov discovered one of the most magnificent and rich Thracian tombs, with an entirely preserved tomb of a Thracian king, buried with his horse.
In the sarcophagus were discovered more than 20 gold items (works of Thracian art) with high artistic value - a gold wreath with oak leaves and acorns, a pot, a gold ornament for horse bridles, and bronze receptacles. No less valuable are the iron sword, adorned with gold ornaments, a helmet, as well as other weapons. Of particular interest is the full-size bronze head of a bearded man, with semi-precious stones for eyes.
The tomb size and the immense value of the precious items found in it prove that here was buried a great Thracian ruler. Inscriptions on the protective armor show the name of the ruler – Seuthes. It is assumed that this was the famous Seuthes III, the ruler of the Thracian town Seuthopolis.
The unique gold mask of the ruler, which weighs almost 700 grams, and the gold signet-ring show the greatness of the buried Thracian king. Today, the original mask can be seen in the Archaeological Museum in Sofia.
The National Institute of Archaeology with a Museum, at BSA (Bulgarian Science Academy) is committed to research of material and spiritual culture of the tribes and peoples that inhabited Bulgarian lands from ancient times to the eighteenth century.