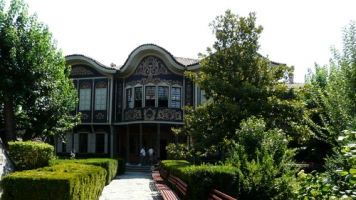 Address: Bulgaria, Plovdiv, 2 Stoyan Chomakov str.
In one of the most picturesque spots in the Old Town of Plovdiv, near the East town gate - Hissar Kapia, is located one of the most remarkable houses in Old Plovdiv, built in the National Revival architecture style. It was the former home of the merchant Argir Kuyumdzhiouglu, erected in 1847 by a Rhodope master.
With its magnificent facade the Kuyumdzhiouglu House (Kuyumdzhieva kashta) is the pinnacle of baroque architecture in the country.
The house is part of the architectural and archaeological reserve "Old Town." Today, the unique building is a national cultural monument.
The museum is a place where tradition can be seen, touched and felt. Its comprehensive collection represents the traditional culture of Thrace, of Rhodopes and of Srednogorie from the National Revival period. In a permanent exhibition, the agriculture and stock-breeding are presented as the main livelihood of the population in the region. From the traditional crafts, here can be seen some of the most typical ones for the National Revival period: homespun tailoring, braiding, pottery, crafting with copper and iron. The goldsmith’s workshop is showcased with all its stock in the wonderful home. Part of the rich collection of ornaments and church plate is also on display.
There is a special place, dedicated to traditional folk costumes, fabrics and carpets. With its more than 11,000 artifacts, this is the largest collection of the museum. It includes unique carpets, dated from the mid to late 19th century.
The collection of traditional costumes and urban style garments is also very rich. It represents exhibits not only from the region, but also from other parts of Bulgaria. Of particular interest is the collection of underwear from the late 19th and early 20th century.
Museum collections include over 800 exhibits in the department furniture and interior, which are dated from the beginning of the 19th to the middle of the 20th century. The highlight are the collections of painted porcelain bowls, oil lamps, cast iron and tiled stoves, suites of furniture, decorated chests and crates. The Museum houses 5,400 exhibits in the Musical instruments department. Barrel organs, pianos, gramophones (some of which from the early 20th century) represent the urban culture of the past century. In addition, the museum’s collections have a variety of folk instruments from the region - pipes, wooden pipes, flutes, rebecks, guslas, ocarinas, drums.
Urban life is not represented in great detail. The interiors of the Koprivshitsa room, Rhodope room and the Plovdiv living room give additional information about the life and culture of the population in the region.