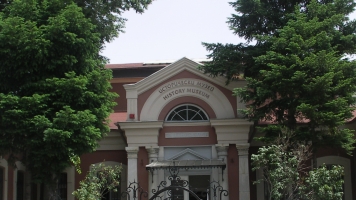 Address: Bulgaria, Plovdiv, 1 Suedinenie str
The History Museum in Plovdiv houses over 60,000 exhibits and presents the cultural treasures of the city and Plovdiv region from the times between 15th and 20th centuries. There are four displays in the museum, arranged in four different buildings and divided by periods and themes, namely: The Unification of Bulgaria, The Bulgarian National Revival, Publishing and Contemporary art and history.
The collection "The Unification of Bulgaria in 1885" is displayed at a building on 1 Unification Sq., which was first intended to house the Parliament of Eastern Rumelia. However, after the Unification of Bulgaria, the parliament was moved to Sofia. It was designed by the Italian architect Pietro Montani, and is considered one of his greatest artistic achievements. The display was set up for the celebration of the 100th anniversary of the Unification of Bulgaria, one of the most significant events in the history of Bulgaria. The exhibition covers the establishment and the development of the second Bulgarian state and the preparation for the reunification of the country. Among the objects featured in the collection are documents and items related to the Unification of Eastern Rumelia and the Principality of Bulgaria, weapons, awards etc.
The exhibition "Bulgarian Revival" is located in the Old town of Plovdiv at a house, which is a cultural monument of national significance. It was built at the request of the rich craftsman George Kendindenoglu. Until the early 20th century it was owned by his brother Dimitar Georgiadi and this is the name by which the house known today. It was built in the typical for the 19th century style, the so-called "Plovdiv symmetrical house." The exhibition presents the history of the town from 15th to the 19th century.
The display, called "Publishing in Bulgaria in the second half of the 19th early 20th century", is housed in a building, symbol of the National Revival architecture, located on Taxim Tepe. It was opened in the home of the founder of Bulgarian modern publishing Hristo Danov. The display features unique copies from the period of the Bulgarian Revival, and traces back the stages of the development of the Bulgarian School and the activity of many famous Bulgarian scholars like Yoakim Gruev and Nayden Yovanovich. Another main thread in the exhibition is the representation of Plovdiv’s vast role as a center of education and culture in the 19th and 20th centuries.
The Museum Centre of Modern History is located in a building that was originally intended to be a military club. In 1951 the building was used as a Museum of Capitalism. Today it presents contemporary art. Exhibitions, seminars and other cultural events are being organized in it.
The exhibition "The Soul of the Japanese Doll" is an interesting part of the displays.  It represents the history of Japanese dolls, donated by the Japanese Embassy in Bulgaria. It also features the traditional Japanese kimono, toys and accessories.