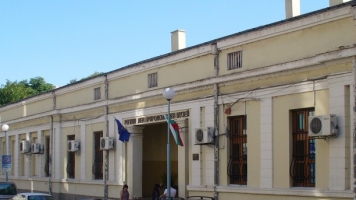 Address: Bulgaria, Plovdiv, 34 Hristo G. Danov str
Plovdiv Museum of Natural History opened in 1955 in the old building of the former Plovdiv municipality, designed in 1880 by the renowned architect Josef Schnitter. The first displays of the museum were the rich collections of the former French College "St. Augustin." Today, with its comprehensive collections in the departments "Paleontology", "Mineralogy", and "Botany", the museum is one of the most significant in the country.
On display at the Museum is a collection, dedicated to Bulgarian flora, fauna and geology. It comprises the following sections: "Evolution of living organisms and inanimate nature", "Plants", "Invertebrates" and "Vertebrates - fish, amphibians, reptiles, birds and mammals."

In 1974, as a result of a vast scientific research, carried out by the staff at the museum, as well as of the museum’s evolving to a higher scientific level, new sections were added to the exhibition: "Minerals from the Rhodope Massif," "Our edible and poisonous mushrooms," "Protected natural objects and plants in Plovdiv region.“
In 1974, for the first time in the exhibitions of the natural history museums in the country, live species area was created in the basements of the museum, called "Freshwater Aquarium". It is located on an area of 100 sq m where, in 44 beautifully set aquariums, are showcased 32 species of ornamental fish and exotic plants.
In 1976, in the lobby of the museum was build a central diorama, featuring birds and mammals. In 1979, in the "Geology" hall, a new exhibition was set up with recent acquisitions, called “Semi-precious stones from the Rhodopes”. During the 1981/1982, on the occasion of the World Hunting Exhibition, the halls "Birds and "Mammals" were rearranged. A restoration was made to one of the most interesting and rare species, the biggest snake in the world - the anaconda.
The Regional Museum of Natural History in Plovdiv is the second largest and most comprehensive museum in the country, housing a contemporary and modern exhibition, with a view to nature conservation.