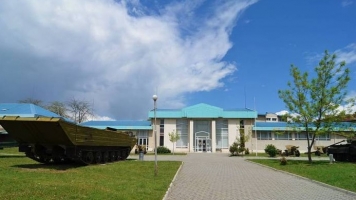 Address: Bulgaria, Sofia, 92 Cherkovna str
The National Museum of Military History is established on July 4, 1916 by a decree of King Ferdinand. The National Museum of Military History is a scientific and educational institution, administratively governed by the Ministry of Defense. It has the status of a national institution in Bulgaria. In 1956 the Naval Museum in Varna becomes a branch of the museum, and so does the Park-museum of the combat friendship “Vladislav Varnenchik” later on. The Museum of Aviation near Plovdiv is also a branch of the National Museum of Military History.
For its almost century-old existence the National Museum of Military History has been preserving more than 1 million artifacts - evidence of the Bulgarian and European military history.
This is the only museum in Bulgaria, which offers visitors three types of exhibitions: outdoors one, displaying combat equipment, permanent one and one with collections.
In the outdoors exhibit are displayed more than 230 artillery weapons and specimens of aviation and shipping equipment. Here one can see preserved missile complexes, such as SCAD, FROG and SS-23.
The permanent exhibition, opened in May 2005 on an area of ??2 400 square meters, tells the story of the Bulgarian army, its victories, glory and heroism from the founding of the Bulgarian state until today. The display in the first hall gives visitors an idea what Bulgarian troops looked like in the Middle Ages. Then are presented the national liberation battles, the Russo-Turkish War of 1877 - 1878, the Balkan Wars (1912-1913). The brilliant victories of the Bulgarian Army in the latter are also recognized in the world military history. The participation of armed forces in the First and Second World Wars as well as in contemporary military missions has also been recreated. The exhibition attracts visitors with its interesting re-enactments, sound effects, and a special mix of exhibits and paintings of famous Bulgarian artists.
The target audience of the museum halls with various collections is people with specific interests. The first hall presents firearms and side arms. Special attention is paid to the arms from royal collections - these of Prince Alexander I Battenberg (reigned between 1879-1886), of Ferdinand I (reigned between 1887-1918) and of Tsar Boris III (reigned between 1918-1943).
The collections, displaying awards, are arranged in two halls. The first one houses 960 medals and badges that track the development of Bulgarian awards system. In the other hall, for the first time, are displayed the awards of Todor Zhivkov, head of the state of Bulgaria, who ruled between 1954 -1989. The hall with uniforms houses 600 specimens that track the development of Bulgarian military uniform by periods and types of armed forces.
Today the National Museum of Military History preserves the national identity of Bulgarian people as part of the European family.