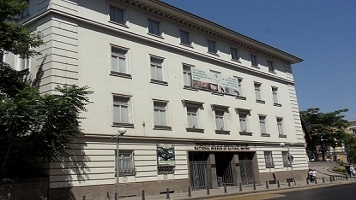 Address: Bulgaria, Sofia, 1 Tzar Osvoboditel str
The National Museum of Natural History has more than a hundred and twenty years history. It is the oldest museum in Bulgaria and the oldest and richest among natural history museums on the Balkan Peninsula. Founded in 1889 by Ferdinand I, under the name Natural History Museum of Knyaz Ferdinand, in the beginning it displayed birds, mammals and butterflies collections, which belonged to Ferdinand I.
The first curator of the museum was the court physician Dr. Paul Leverkuhn, a famous ornithologist. He arranged the first exhibition in 14 halls, on two floors, at an old building that opened to the public in 1907. In the same year was released the first, and so far the only one, comprehensive catalogue of these collections, with listed thousands of artifacts from that time.

Scientific collections, held at the National Museum of Natural History, are the most representative of their kind on the Balkans. The total number of specimens and exhibits in them is about one million. Among them are featured over 460 mammal species and more than 1990 bird species. The collection of reptiles and amphibians is one of the richest in Europe. There are about 480 000 insect exhibits and more than 300 000 fossils of invertebrates. The collection of cave fauna from Bulgaria and other countries, which is remarkably rich, comprises species that are not displayed in any other museum in the world. The museum inventory is being enriched by collecting activities in the country, expeditions or individual trips abroad, exchanges with similar foreign institutions, grants, purchase of private collections, acquisition of collections, seized by customs and security authorities, or with individual specimens.
The Paleontological branch in Asenovgrad houses about 30 000 fossil bones from Miocene mammals that have lived on our land.