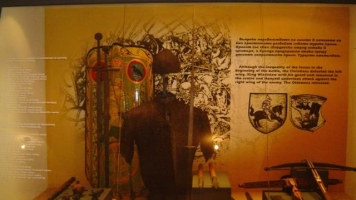 Address: Bulgaria, Varna, Mladost  district, 3 Yanos Huduyadi Blvd
The Park Mausoleum "Varnenchik" is dedicated to the battle near Varna that took place on November 10, 1444. The complex was built in the center of the former battlefield.
As far back as the times of slavery, Bulgarians put wooden crosses in the place, around two Thracian tombs (dating back to IV century BC.), where the Polish-Hungarian king and hero Vladislav Varnenchik died. In 1924 a park was built as a memorial and in 1935, within the jurisdiction of the Ministry of War, a mausoleum of Vladislav III Yagello opened.
On the occasion of the 520th anniversary of the battle a museum was opened with an exhibit, based on documentary material about the marches and the battle near Varna, and showing weapons found on the battlefield as well as replicas of items given as a gift by the Military Museums of Warsaw, Budapest, Prague, Bucharest and Belgrade.
The exhibit shows medieval coats of arms and flags, paintings and sculptures, armor and swords, chain-mails and maces, bombard and halberds, bows and crossbows. All these artifacts form a vivid picture for the visitors of these dark ages of Bulgarian history and the glorious campaigns of King Vladislav III Yagello and Janos Hunyadi in 1443 to 1444.