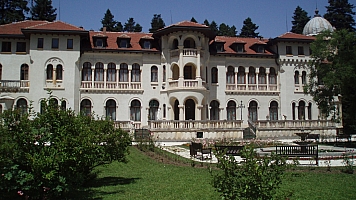 Address: Bulgaria, Sofia, Vrana
Vrana Park Museum is located in the outskirts of Sofia, the capital of Bulgaria. The park spreads on an area of 950 decares and has a 1000-decares farm.
The Royal Palace complex consists of two parts: the Old and the New Palace, built in the 1904 and 1912. The Old Palace was a hunting lodge, designed by the Austrian architect Wolf. It is connected to the New Palace via a covered passage.

Before the Liberation of Bulgaria from Ottoman rule, today's palace was the farm estate (“chiflik”) of Osman Pasha, the Turkish governor of Sofia. Later the land was bought by Knyaz Ferdinand I. Famous for his passion for ornithology, the prince decided to turn this land into a unique exotic place near the capital.

Prince Ferdinand brought many exotic plants, among which dominate alpine and water flowers. Particular attention is paid to the lilies. Most of the aquatic plants have been imported from China, Japan and Australia.

Trivia:
The name of the park comes from the bird crow (“vrana” in Bulgarian). When in doubt how to call the place, Prince Ferdinand decided to give it the name of the first bird that perched around. It was a flock of crows that landed there.
In the park can be seen more than 400 species of plants.

Among the attractions of the palace are a carved ceiling, a gold-plated oak paneling and Delft pottery. The interior columns are made, using the famous Italian stucco technique. There is also a still operating old elevator "Schindler".

The Karelian dining room is a gift from the Russian Emperor Nicholas II on the occasion of the Crown Prince Boris, Prince of Turnovo, attaining his majority. The entire furniture (table, chairs, paneling) of the room is made of Karelian birch by craftsmen, sent specially from the Emperor factories in Petrozavodsk, Russia.