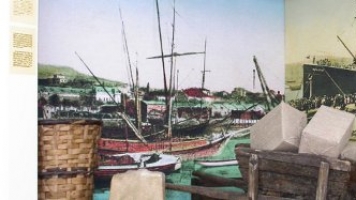 Address: Bulgaria, Varna, 3, „8th November” str
The exposition of Varna history museum is arranged in a building, built during the 30-ies of the 19. century. In 1951 the building was rearranged  into Consulate of Belgium. Later-on it was turned into a hotel. Between 1916 - November 30, 1929 it was used as district prison. Since 1969 it is museum. The building was renewed twice - in 1991 and in 2002.
The exposition presents the development of the city as first-class port, commercial, industrial, national and international resort and healing center, cultural and educational center in the period between 1878 – 1939.
On the ground floor  are arranged exhibits, illustrating the economical development of the city. Displayed are a printing press from the end of the 19. century, the first weaving loom, imported from England in 1902, samples and catalogues of the first cotton spinning mill in Bulgaria - "Prince Boris" and the "textile" factory, plaquettes and charters, with which the participants in the International industrial exhibition (1932 – 1940) and in the National Agricultural and Cultural fair (1936 - 1940) have been decorated, the only longshoreman's packsaddle preserved in Bulgaria, a bulk cargo basket, a scale model of a steam-driven locomobile, used at the construction of the new port.
Original materials were used for the reproduced cartwright's workshop, sewing and cobbler's  workrooms, witnessing the development of the handicrafts in the period.
On the first floor is presented the development of the European architectural appearance of the city and its turning into summer capital of the Bulgarian culture.
Interesting exhibits are: the silver hoe and spade, with which prince Aleksander Batenberg turned the first sod of the cathedral "The saint Assumption", objects from the "Euxinograde" palace, photographs and decorations of the Czech Anton Novak, who has the biggest contribution for the modelling of the seaside garden and the landscaping of Varna and the neighborhood, the working office of eng. Yanko Mustafov, who has longest held the position of mayor of Varna (1935 – 1943 г.).
Here can be seen also the grand piano, purchased for the opening of the first Bulgarian folk music festival, open in the summer of 1926 (herald of the contemporary international music festival "Varna summer").
The exposition on the second floor  introduces the visitors to resort Varna from the 20-ies and 30-ies of the 20. century. The seascape, beach articles, beach nook with a changing booth, the differentiated advertising office, the postcard collection of the seaside baths, the advertising brochures in various languages present how Varna has turned into an international seaside resort center. In 1921 Varna was announced the first Bulgarian seaside resort. Reproduced with their original equipment are: a hotel room, a pastry shop, an eating-house, a photographer's studio, a lawyer's office, a book-shop, a hatter's workshop, shops for children's toys and radio receivers, a guestroom and internal yard of a house in Varna.